CAPITAL PUNISHMENT FOR CRIME AGAINST WOMEN 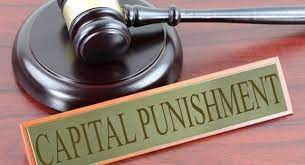 If the supreme court turns down the appeal, then the condemned person can submit a &#39; mercy petition&#39; to the president of India and the Governor of the state. The basic intention behind any punishment, in general, is that a criminal deserves a punishment to set an example for other would-be criminals and to maintain the decorum of civilized human society. Henry Ford puts that &#39; capital punishment is as fundamentally wrong as a cure for crime as charity is wrong as a cure for poverty When the death sentence is awarded for rape, even detailed stories leave out any mention of the debate, for example,  When a political leader makes headlining emotive statements such as “rapists don’t deserve to live”, there are few attempts to balance coverage with statistics or even a summary of evidence-based counter-arguments.

When the matter enters into the realm of emotions of those directly affected, analysis is again put on hold. For example, when the family members of victims — such as the mother of Nirbhaya and the father of the Kathua victim — express views in favor of the death penalty as an appropriate form of retributive justice, media reports rarely provide the context in the form of the larger discourse on capital punishment.

The rape and murder of the young woman in Delhi in 2012 horrific crime and our deepest sympathy go out to the victim&#39;s family. Those responsible must be punished, but the death penalty is never the answer.&quot; Mukesh (26), Akshay Thakur (28), Pawan Gupta (19), and Vinay Sharma (20) were convicted by the court on September 10 for the brutal gangrape of a 23-year-old paramedic student on the night of December 16, 2012 h eventually led to her death. The justice was given in 2020. The justice is delayed but not denied ….....

The alleged torture, if any, in the prison cannot be a ground for judicial review of the executive order passed under Article 72 of the Constitution of India rejecting the mercy petition.” In November 2019, the gang rape and murder of a 26-year-old veterinary doctor in  Shamshabad, near Hyderabad, sparked outrage across India.[1] Her body was found in  Shadnagar on 28 November 2019, the day after she was murdered. Four suspects were arrested and, according to the Cyberabad Metropolitan Police, confessed to having raped and killed the doctor. All four accused were killed in an &quot;encounter&quot;, a term used in India for killings by police, at around 3:30, am IST on 6 December 2019, under a bridge on Bangalore Hyderabad national highway, prompting accusations of extrajudicial execution. Here also the punishment is the death penalty.

I have concluded that the death penalty is morally right to a considerable extent. When a criminal commits a capital crime, they should suffer a punishment which equals the crime and it is thought that the worst punishment possible is the death penalty since it does not only remove a criminal&#39;s physical freedom by imprisoning them, it removes their psychological freedom by withdrawing their choice to live. Currently, the death penalty is administered as a painless injection which is the most humane way possible in comparison to earlier methods such as beheading or the electric chair.