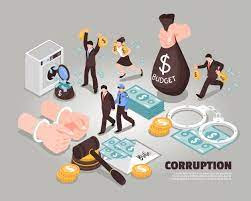 When the diamond merchant Modi scammed the Punjab National Bank (PNB) disturbing millions of people and their lives the actions were taken by our government often made us question the rule. Are we living in a democracy or a plutocratic rule? Corruption is something that is stuck up in our societies for a very long time. From the reins of famous kings, the prevalence of corruption is huge, especially in India, where the Mughal kings were overthrown by the British with the help of other Indian, kings for money and power. Corruption is not always related to money but also many other socio-emotional concepts. This essay further explains the various concepts that are included in corruption, reasons for its prevalence, and ways to end it. This essay also briefs the impact it has not just on people's condition in short term. However, also various other things that are affected.

Corruption includes many activities some of them are listed below.

It is an act of offering some money or something valuable to persuade someone to do something for them. It is probably the most common form of corruption to occur in society.

It means forcing someone into giving something through threats.

It is an act of cheating somebody to get money, property, etc illegal.

It refers to the appointment of friends and associates to positions of authority without proper regard to their qualifications.

It is a deceitful agreement or secret operation between 2 or more parties to limit open competition by deceiving misleading or defrauding others of their legal rights.

6. Meagre salary being paid to the government servants.

7. Emergence of new sources of wealth and power.

THE WAY TO STOP CORRUPTION

Corruption hinders social, political, legal, and economic progress. It distorts decisions making, discourages investment, and undermines competition. So we all must come together and fight against it. One of the best ways is to bring transparency to the system. This would result in power coming into the hands of the public. Apart from transparency, the enforcement should make strict punishment laws, and installing the camera in the workplace. Everything should be shared with the public which will help the people to question the Government which helps to eliminate Corruption.

IMPACT OF CORRUPTION IN POLITICS:-

Today many people believe that politics is based on corruption. Few politicians are exposed, and the remaining ones have a namesake clean chit. One party might be less corrupt than the other, but all are corrupt to some extend. People have lost their trust in the democratic system, government offices, and institutes.

IMPACT OF CORRUPTION IN ECONOMY:-

The prosperity of a nation is at stake due to the prevalence of rampant corruption in the system. The huge pile of non-performing Assets, lack of foreign investments, time, and cost overruns of infrastructure projects are the adverse effects on our progress. It makes us unfriendly and difficult for foreigners to come and invest here. Red tape is also a reason for delayed and stopped projects.

IMPACT OF RTI ON CORRUPTION:-

Right to Information (RTI) has had a positive impact on the working of these institutions especially the Public Distribution System and the education sector where the termite of corruption had been pervading. It has helped in removing the opaqueness from these institutions and increasing the accountability of those who manage them. Conclusion of corruption? There is no conclusion of corruption as there is no conclusion of theft, robber, murder, rape, bullying, and many other acts people are doing to others. Corruption, similar in a way to the theft from government or from an “abstract entity” looks different, but is similar. You take something from others for your own good. Corrupt people should be chased, haunted, and punishment in harsher ways to prevent the feeling that exists in some societies that is the way to make money and promote yourself in society. The higher the corruption, the higher the punishment. I know that it is not an easy matter as those people are close to the government and politicians have a lot of money, but this is the only way to live in a healthy society.

“THE BIGGEST DISTANCE IS CORRUPTION.

THE VACCINE IS TRANSPARENCY”