A question for you before going into the topic. Why did Elon Musk, the second richest man in the world, respond to Madan Gowri of Tamil Nadu? 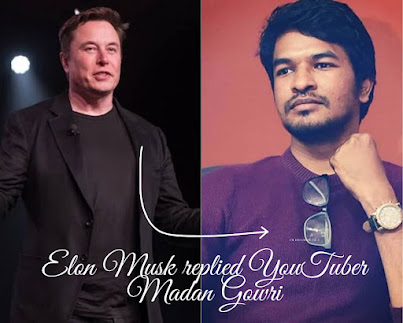 Tesla is an American electric vehicle and clean energy company based in Palo Alto, California. Tesla's current products include electric cars, battery energy storage from home to grid-scale, solar panels and solar roof tiles, as well as other related products and services. Elon Musk, the Tesla company's founder, has said that Tesla's car plant will definitely open in India if it offers a temporary exemption from import duty on electric cars.

Tamil Nadu celebrity YouTuber Madan Gowri has asked when the American company Tesla will introduce electric cars in India. Elon Musk responded by saying that Tesla was looking forward to the day, but that it was unlikely because India had the highest import duty in the world. He said India should not treat electric cars like petrol and diesel and that it would not be conducive to climate change in India. At the same time, he said that he expects the Indian government to provide a temporary tax exemption for electric cars, and if so, a Tesla car plant would be set up in India. 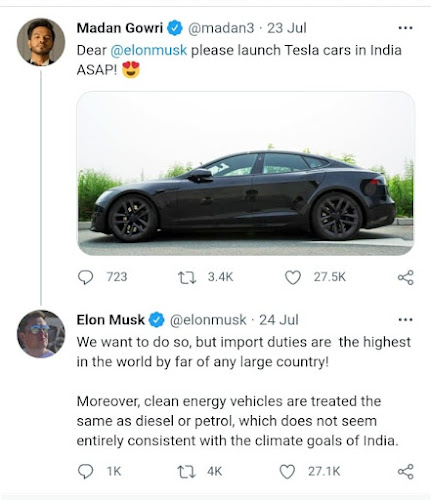 Meanwhile, government sources say that Tesla has written a letter to the Union Government of India to reduce the import duty on electric cars. It is noteworthy that a few days ago, Union Transport Minister Nitin Gadkari called for "Tesla to open a car manufacturing plant in India".

What do people think?

The Union government has said it will impose higher taxes on foreign cars to encourage domestic carmakers. But economists blame rising Union Government taxes on rising petrol and diesel prices. The demand of the people is that the Union Government should reduce the tax on petrol and diesel or relax the taxes on electric vehicles and make it possible for them to buy them at cheaper prices.

Hope you liked this news. We will meet in the next article...