Review of Old Man and The Sea Book 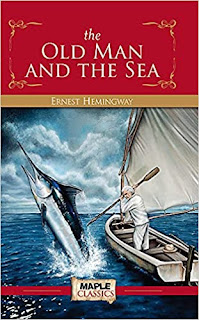 The name of the oldest fisherman in Cuba is Santiago. Although Santiago is old he goes alone in his boat and catches fish. He has been returning to his hut with bare hands for almost 84 days now without getting any fish. He is ridiculed and teased by other fishermen for being unlucky. On the 85th day he goes in his small boat to the deepest sea in Cuba and lures the fish. He goes a long way. At noon a giant marlin is caught in the bait. The old man Santiago is stranded at sea for two days, along with the bait and the boat, on the bait of Marlin's.

Santiago suffers a terrible injury. On the third day Santiago used all his strength to stab the giant fish with his spear and tie it to the side of his boat. He leaves happy to go ashore. That attracts sharks to the rot of blood coming out of Marlin's body. Santiago fights hard with sharks. The sharks, however, leave only Marlin's head and bones. Exhausted, Santiago leaves the boat at shore, thinking he is an unlucky man, and goes to sleep in a hut. Fishermen who came ashore the next morning measured the length of that marlin bone in Santiago's boat. Its length is almost over 18 feet. Surprised everyone apologizes to Santiago and everyone leaves to fish with him.

This story is a story book of 100 pages. This story is very simple to read and intriguing. But the things we need to learn from this story are important. If we read a book then that book should be useful to us in some way.

Let me tell you three things I learned from reading this book.

1. The first thing to do is travel. Travel long distances. Traveling can teach us many things. Some journeys will show us the path to progress. Now in this story, Santiago went on a long journey on the 85th day and caught that huge fish.

2. The second thing is to practice fighting alone. You may have experienced many struggles in life‌. There will be many more struggles to be faced. Only when we fight alone will it give us the greatest confidence and courage. Importantly do not expect anyone to help.

3. Third is the training to take on the attitude of success and achievement while undergoing emotional states. Do not expect the benefit. Do your duty to the best of your ability and energy. Santiago tie the fish to his boat using his full strength. The shark eats the fish and leaves only its head and bones when it thinks it has paid off. On the surface it was a failure for the old man. But the value of the old man rises only after the other fishermen see the fish after it comes ashore. All those who mocked him apologize to Santiago. Praise him. This is why even if Santiago had come back with the whole fish other fishermen would have said that Santiago might have gotten the fish with some luck. But his respect has risen because he worked hard and brought that fish.