Advancement of Women in India 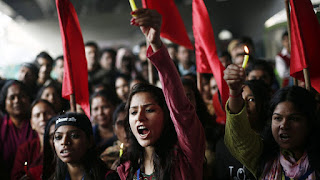 In India, where women are considered as mothers, women are being enslaved and abused. It is a pity that women seek to destroy women.

The Status of the Woman

In ancient times women were proud. That is why all the rivers of the motherland were called by the name of the woman. From the fact that many female poets lived during the Sangam period and from the heroic life of Lakshmibai, the Rani of Jhansi and Rani Mangammal, we can know that women excelled in all fields.

The custom of having his wife jump into the fire with him if the husband dies came from the name of conspiracy. Reformers like Rajaram Mohan Roy slammed it and removed it.

Women today have the same responsibilities as men in a family. Many families depend on women. But even today, in the name of dowry, women are given and gold is given. It is painful to note that many of these women are abused by the groom's house. If the wife dies, the widow is denied marriage while the groom remarries.

To this day, women are given second place in society. Gandhiji said he would accept that peace prevails in the country if a young woman walks the streets alone in the midnight. But in the daytime, the news about men abusing women is the same.

Female infanticide still exists in many families today. The family does not provide adequate education for women. Similarly, it is painful to portray women as mere objects in movies and advertisements.

Women today are proving that we can achieve in any field. However, violence against women continues today. No one can deny this. But the comforting news is that many women's organizations are emerging and listening to these atrocities.

It is to be welcomed that the government has come up with several legal schemes and shown interest in the advancement of women. The State Government and the Central Government have enacted laws such as the Dowry Prohibition Act, the Maternity Allowance Act, the Industrial Rules, the Sharda Act and the Equal Pay Act and are making arrangements for data on reservations for women.

The government and the general public must protect women's rights by providing them with education and equal rights. We must remember that men and women are equal.

We will realize Bharati's dream that this world will flourish only because men and women are equal. Understand the fact that the two wheels of the cart of society are male and female and everyone should participate in the advancement of women.