Book Review:The Fault In Our Stars 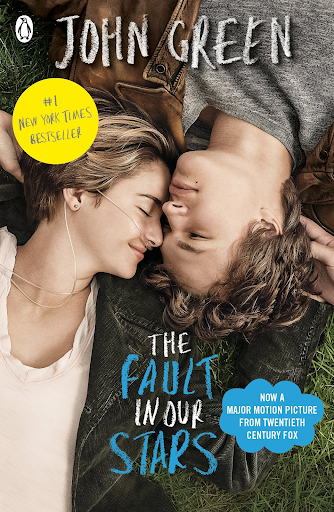 "The marks humans leave are too often scars"

When I saw this book my first impression was aaaah! another love story until I saw the movie "DIL BECHARA" by the late Sushant Singh Rajput then I was convinced I'll buy this book and this was one of the best decisions I ever made

The Story starts with a 17-year-old girl named Hazel Grace who is a cancer patient and uses an oxygen cylinder to breathe as she has thyroid cancer which has significantly spread to her lungs. She joins a cancer group for her moral support and shares their experience where she catches her eyes on a teenager named Augustus waters he was there to support their mutual friend Isaac who has a tumor in his one eye where Augustus invites her for a movie night and they share their cancer experience, Augustus reveals that he had cancer before Osteosarcoma which was removed after amputating his leg. And they share their favorite novel with each other Augustus gives her Princess of Dawn and Hazel recommends An imperial affiliation where she shares the story of the book with him it was about a girl who has cancer and she tells him it shares the same experience as the book explains with her, She speculates about the novel’s mysterious author, Peter Van Houten, who fled to Amsterdam after the novel was published and hasn’t been heard from since.
Augustus meets her and tells he found out the writer of the book and he is in Amsterdam and Hazel was happy and wanted to meet her but fate had another story, Hazel was admitted to the hospital because her lungs were filled with fluid, she was discharged after one week where she came to know Augustus was with her in the hospital for 8 days, Augustus gave her a letter by the writer where he invites her to Amsterdam, but it was nearly impossible as she wasn't strong enough and her parents didn't want to take any risk but one of the family friends told them to let her live her life, she flies to Amsterdam with her mom and Augustus and they finally went to meet the writer where they find the writer was nothing but drunkard which broke her hopes to know what really happened in the last of the book as the book was incomplete.

. At the end of the tour, Augustus and Hazel share a romantic kiss, to the applause of spectators. They head back to the hotel where they make love for the first and only time. The following day, Augustus confesses that while Hazel was in the ICU he had a body scan which revealed his cancer has returned and spread everywhere. They return to Indianapolis, and Hazel realizes Augustus is now the grenade. As his condition worsens he is less prone to his typical charm and confidence. He becomes vulnerable and scared but is still a beautiful boy in Hazel’s mind. As this change occurs, she ceases calling him Augustus and starts referring to him as just Gus, as his parents do. Hazel recognizes that she loves him now as much as ever. Augustus’s condition deteriorates quickly. In his final days, Augustus arranges a prefuneral for himself, and Isaac and Hazel give eulogies. Hazel steals a line from Van Houten about larger and smaller infinities. She says how much she loves Augustus, and that she would not trade their short time together for anything in the world.

The last pages of the book show that Augustus wanted the writer to write a book on Hazel and wanted him to disrespect Hazel when she meets him so he can write a sequel on her. Augustus was sending papers to him so he could write a story on her

The book ends with a quote by Augustus

"He says getting hurt in this world is inevitable, but we do get to choose who we allow to hurt us and that he is happy with his choice"

book review Sushant singh rajput The fault in our stars