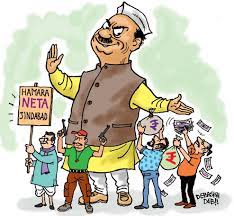 At present we very often come across the words criminalization of politics. The meaning of the term is quite known to educated people and newspaper readers. When politics or political power is used by self-interest-seeking persons for pecuniary gains or various other advantages such as to get a special position in administration or to rise to the higher stage of administration which is normally not feasible. So criminalization of politics means to use politics or political power for nefarious gains. To gain something not legal or normal has been called a crime. Here the word crime is used in politics in a special sense.

India can vaingloriously claim itself as the world’s largest democracy, but can’t hold up to claim to be the greatest democracy of ideal representatives. Because, there is a constant and audacious increase over the years in the number of candidates in the elections, whether for Parliament or the state assemblies with criminal cases against them.

The ADR ( Association for Democratic Reforms) analysis shows that the candidates facing criminal charges had more chances of winning as compared to those with a clean record and this raises the question as to why Indians elect criminal politicians? It is usually said that people vote for criminals out of fear. Indian voters elect criminals due to the benefits of the divine they would receive from them since the politicians would have huge discretionary power over the implementation of policies that enable the distribution of benefits to the public

Criminalization of politics in India includes political control of the police, state money, corruption, weak laws, lack of ethics, values, vote bank politics, and loopholes in the function of the election commission. Having a weak rule of law in India is the main reason that has led to an increase in alternative forms of dispute resolution.

Every country’s fate depends upon its politics. Abraham Lincoln says, “ Democracy is a government of the people, by the people and for the people”. But now, the rule of law can only be found in books. Criminals, powerful people, the machinery have formed such a dangerous cocktail that is now proving to be poisonous for society. Corruption and criminalization of politics are ruining the roots of democracy.