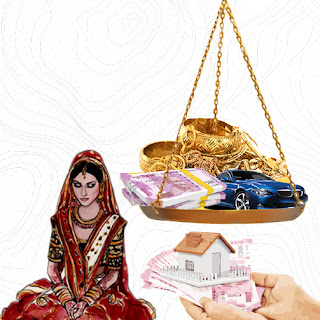 Dowry is an ancient culture. It has ever been an essential part of a marriage. It means money, in cash and kind, which is brought by a bride to her husband’s house. It was meant to help the newly-wedded couple set up a new home and live happily. Thus dowry was all right then. Even now, there is no wrong in giving dowry willingly and when it is within reach of the parents of the bride. But it is a curse when it is heartlessly pulled from them.

Causes of Dowry System in India

Dowry demanding often is exemplary of the collective greed of society. Extortion in the name of compensation, social standing for the cost of groom’s education, his financial stability is the major factor of Indian marriages.

The Dowry system is entirely the manifestation of the patriarchal nature where men are taken to be at a higher level than women in aspects of mental and physical capabilities.

Religious constraints imposed by society on marriage customs are a factor towards dowry issues. These constraints don’t condone inter-religious marriage or between different religious sects, and so limit the number of suitable matches.

Apart from a similar religious background, some constraints are imposed based on social status and the caste system. Practices such as clan exogamy and caste endogamy have to remember while arranging a match.

The inferior social standing of women in Indian society is so deeply rooted in the country’s mind, that this treatment as commodities is accepted with no question, not only by the family rather also by women themselves.

The dowry system is criticized daily by all, but nothing fruitful has been done so far. Anti-dowry bills have been passed. Laws against asking and attempting dowry have been made many a time, but the scandal remains unabated.

But law alone cannot do much. Society Must also come ahead to help itself. Proper education of the public mind in this matter through various means is required. Schools, colleges, and universities should hold seminars and discussions to consider the problem of dowry. The dowry system is sound when one takes it as a gift given to the bride by her parents. If the groom’s parents demand money to get married as a “dowry”, then that is entirely illegal and wrong.