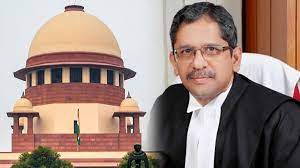 President Ram Nath Kovind on April 6 appointed Justice NV Ramana as the 48th Chief Justice of India (CJI), accepting the recommendation made by his predecessor SA Bobde, who is due to retire on April 23. Justice Ramana, 63, who will take oath on April 24, will remain in office until August 26, 2022. It will be the longest tenure for a CJI in nearly a decade. Born on August 27, 1957, in an agricultural family in the Ponnavaram village in Krishna district of undivided Andhra Pradesh, Justice Ramana was a student leader during the nationwide Emergency in 1975. He lost an academic year too during his days as a student activist.

Justice Ramana worked as a journalist for a regional newspaper for two years before enrolling as an advocate on February 10, 1983.

As a lawyer, he practiced in the High Court of Andhra Pradesh, Central, and Andhra Pradesh Administrative Tribunals, and the Supreme Court of India in civil, criminal, constitutional, labor, service, and election matters.

He has specialized in constitutional, criminal, service and inter-state river laws, according to the website of the National Legal Services Authority, set up on November 9, 1995, to provide free legal aid to eligible candidates and organize Lok Adalats for the speedy resolution of cases. The CJI is its Patron-in-Chief.